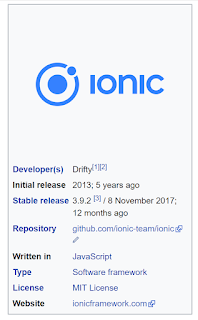 Ionic Framework is created by Max Lynch, Ben Sperry and Adam Bradley in 2013 and the original version was released in 2013 and built on top of AngularJs and Apache Cordova. The recent releases known as Ionic/Ionic 3, are built on Angular.

Ionic Framework is focused mainly on the look and feel, and UI interaction of your app. That means we aren't a replacement for PhoneGap or your favorite JavaScript framework.

In short - Ionic Framework is an Angular Application with a neat set of Angular components and pre validated Cordova plug-in. And of-course Ionic framework can be used for web app also (Cordova plug-in will not work as it is for native device not for web browsers).

What Is the Current Stable Version of Ionic Framework?
Ionic 3, it was released on 24th February, 2017and it helps us to build a native mobile applications using HTML5,CSS, and JavaScript.

Ionic Framework mainly focuses on the look and feel, and the user interface of our applications.

What Are The Benefit of Ionic Framework?
The Benefit of Ionic Framework -
1.      Ionic framework is an open- source free platform
2.      Code once, run on all mobile devices
3.      One programming language for all mobile OS
4.      One source for all the supported platforms (mainly Android and OSX)
5.      Main development in HTML5, CSS and JavaScript
6.      Ionic uses Angular as the basic framework which could be used to diversify into web applications as well.
7.      Good availability of "plug-in", If you are hiring someone to build your app you'll reduce costs.

What Are The Disadvantages of Ionic Framework?
The Disadvantages of Ionic Framework -
1.      Possible performance issues depending on application type. But alternatives to PhoneGap do exist
2.      Security issue - Ionic applications may not be as secure as the native applications.
3.      Need for specialists, JS can be tricky to learn for new guys
4.      If you don't like Angular,  you don't use it
5.      Early adopter risk. This technology is still in its infancy. Support keeps changing, standards keep changing, and libraries can be completely rewritten at any time
6.      The native Java SDK integration in the JavaScript is a pain too


What Are The Advantages and Disadvantages of Ionic Frameworks?

Is the Ionic Framework Responsive?
Yes!, Ionic framework is quick, smooth and responsive.

The Ionic Framework offers developers a responsive grid similar to that of something like Bootstrap (CSS Frameworks).

It is also good in a relative term. Ionic is mature. It's cross platform. It's open and is built upon very well understood web standards. Mobile browsers since iPhone 5s and up are capable of running Ionic apps to optimal standards.

Is Ionic Native?
Yes!, Ionic Native is a Typescript wrapper for Cordova/PhoneGap plugins that make adding any native functionality you need to your Ionic mobile app easy.

Let explore the link for detail => Setup and Install

How To Use Observables in an Ionic Framework?
Observables are something that are not specific to Ionic or Angular and are provided by the RxJS library.  Observables are almost similar to the promises but you can do lots of more.

How to parse JSON in Ionic Framework?
The JSON.parse() method parses a JSON string, constructing the JavaScript value or object described by the string.
The Example is -
var users = JSON.parse(userResponseData);

How To Disable / Enable Content Scrolling in IONIC Framework?
We can disable/enable scrollbar pragmatically.

Example 1 -  Try a setting <content scroll="false"> that will disable scrolling.

Example 2 , You can alos used this as a quick fix –

This every time an event is called, in our case, on every drag event.