Anil Singh 4:05 AM 65 Best NodeJs Interview Questions and Answers , add rows in angularjs , dynamically add treeview nodes in jQuery MVC 5 , node.js interview questions and answers , what is node.js? why we use? Edit
1) What is Node.js?

The use of JavaScript also means that transforming JSON data—the most common data interchange format on the Web—is fast by default.

Node.js Installer Following Steps,
1.           Download the Windows installer from Nodejs.org official site.
2.           Click and Run the installer (.msi installer package).
3.           Follow the prompts instructions of the installer (Accept the agreement and click the NEXT button)
4.           Restart your computer to get everything working in your command line interface (CLI).

Download Installer,
Download Node.js built installer and source code as for you, for Window, Mac and Linux with NPM and after that you can start developing applications.
The NPM is located in the directory where the Node.js is installed.


Update to Node.js, simply goes to Node.js official site and downloads Windows, Mac and Linux installer, and then executes the installer. Now your latest version of Node.js is updated on your machine.
2) Why Node.js?
The main reasons to use Node for what I do - which is building backend APIs for mobile and web application:
1.      Non-blocking asynchronous I/O (blocking I/O doesn’t scale for high concurrency)
2.      Single-threaded event loop (like nginx and Redis - read: FAST)
3.     Event-driven servers
4.      Real lexical closures (like Haskell and Scheme - unlike Java and C++)
5.      Built-in support for promises and generator-based Coroutines
6.      HTTP/2 in the core (I don’t know of any other language/runtime that has a built-in support for HTTP/2 with no need to install any dependencies, at the time of this writing)
7.      Excellent support for building REST, GraphQL and WebSocket servers, with Socket.io for legacy clients.

5) In which Language Node Js is written?
Node.js is written in C, C++, and JavaScript. It uses Google’s open source V8 JavaScript Engine to convert JavaScript code to C++.

6) What Is npm?
The NPM is Node.js' package ecosystem. It is the largest ecosystem of open-source libraries in the world. It is also the name of the command line package manager used to interact with npm.

5) What is the name of the file which npm uses to identify the project and its dependencies?
Its name is package.json.

8) Can we use other Engines than V8?
Yes! Microsoft Chakra is another JavaScript engine which can be used with Node.js. It’s not officially declared yet.

10) What Is the current version of Nodejs?
Click to know the detail about the - Latest Nodejs Version

11) Where To Downloads and Install?
The Latest LTS Version: 12.13.1 (includes npm 6.12.1)
Download the Node.js source code or a pre-built installer for your platform, and start developing today.
The Downloads link…

12) How To upgrading Node.js to latest version?
Windows:
You just download and reinstall node from the “.msi” in Windows from the node website.

14) When To Not Use Node.Js?
Node is a single threaded framework, so we should not use where the application requires long processing time, or taking so much time for any calculations.

15) For Node.js, Why Google uses V8 Engine?
Google uses V8 as it is a Chrome runtime engine that converts JavaScript code into native machine code.

These, in turn, speeds up the application execution and response process and give you a fast running application.

17) How To check the NPM version?
You can always check the version with following command:
npm -version

18) How To check the Node version?
You can always check the version with following command:
node –v

Core Modules -
Generally, Core modules get loaded just after the initiation of the Node process.

Local Modules -
The Local modules are created locally by the user or dedicated software developer. All such modules may have several functionalities grouped into different files and folders. And all these can be distributed in the Nodejs community with the help of Node Package Manager.

20) What Is Global Objects in Node.Js?
The term global objects standard built-in objects.
These objects are available in all modules. The following variables may appear to be global but are not. They exist only in the scope of modules, see the module system documentation:
1.      __dirname
2.      __filename
3.      exports
4.      module
5.      require()
Note - most of developers to be confused with the global object.

23) What Is Node.js' Cluster module?
The Nodejs module used to take advantage of multi-core systems, so that apps can handle more load.

35) What is the file `package.json`?
The package.json is a plain JSON text file which contains all metadata information about Node JS Project or application.

Every Node JS Package/Module should have this file at root directory to describe its metadata in plain JSON Object format.

The package.json file contains a number of different directives or elements.

27) What is the alternative to the Node package manager (npm), which was introduced by Facebook in 2016?
yarn

Version - The Version is a mandatory directive in package.json file and it contains the version information.

35) Is Node.js really Single-Threaded?
Yes, it is a single thread

37) What Is the event loop?
The Node.js processes incoming requests in the event loop. It is what allows Node.js to perform non-blocking operations despite the fact that JavaScript is single-threaded.

38) What Is __dirname?
A global variable which returns the absolute path of the directory containing the currently executing file.

40) Explain REPL in the context of Node.js?
REPL stands for Read, Eval, Print, and Loop.
REPL represents a computer environment such as a window console or Unix/Linux shell where any command can be entered and then the system can respond with an output.

Node.js comes bundled with a REPL environment by default.

REPL can perform the below-listed tasks:
1.      Read: Reads the user’s input, parses it into JavaScript data-structure and then stores it in the memory.
2.      Eval: It used for receives and evaluates the data structure.
3.      Print: Prints used for print the final result.
4.      Loop: It used for loops the provided command until CTRL+C is pressed twice.

41) What Is callback?
A callback is an asynchronous function which is being called when an Ajax request/call is completed.
The Node.js is using much more callback because the entire node APIs use it.

The error first callback pattern just requires that your function accepted two parameters and the first is an error and second one is the data.

The error is an object not a function and the error object containing the related information an also we can set a null value at the place of error object if there is no error occurred in the apps.

43) How can you avoid callback hells?
To do so you have more options:
1.      modularization: break callbacks into independent functions
2.      Use promise
3.      Use yield with Generators and/or Promises

45) What Is underscore in Node.js?
The Underscore is a library that is used to deal with arrays, collections and objects in JavaScript.

Once added, underscore can be referred in any of the Node.js modules using the CommonJS syntax:
var _ = require('underscore');

46) What Is LTS releases of Node.js?
The LTS stands Long Term Support version of Node.js that receives all the critical bug fixes along with security updates and performance improvements.

47) What Is the concept of stub in Node.js?
The stubs are basically the programs or functions that are used for stimulating the module or component behavior.

48) What Are the various Timing Features of Node.js?
Node.js provides a Timers module which contains various functions for executing the code after a specified period of time.

49) What Are the difference between node.js and Ajax?
Node.js is a server-side JavaScript-based technology and it’s used for developing the server software that are typically executed by the servers instead of the web browsers.

AJAX is a client-side JavaScript-based technology and it’s mostly used for updating or modifying the webpage contents without having to refresh it.

50) Does Node.js provide any Debugger?
Yes! It is.

51) What Is Stream and Explain types?
Streams are a collection of data that might not be available all at once and don’t have to fit in memory. Streams provide chunks of data in a continuous manner. It is useful to read a large set of data and process it.

52) List types of Http requests in Node.js?
Http defines a set of request methods to perform the desired actions.

These request methods are:

GET: The GET method asked for the representation of the specified resource and used to for retrieve the data.
POST: The POST technique is utilized to present an element to the predetermined resource, generally causing a change in state or reactions on the server.
HEAD: The HEAD method is similar to the GET method but asks for the response without the response body.
PUT: This method is used to substitute all current representations with the payload.
DELETE: It is used to delete the predetermined resource.
CONNECT: This request is used to settle the TCP/IP tunnel to the server by the target resource
OPTION: This method is used to give back the HTTP strategies to communicate with the target resource.
TRACE: This method echoes the message which tells the customer how much progressions have been made by an intermediate server.
PATCH: The PATCH method gives partial modifications to a resource.

54) How Node.js Read the Content of a file?
Node provides the fs library to handle file-system related operations. The fs.readFile() method is used to read files on your computer.

As an example to active this –

55) How To Read a text file using Node.js?
The fs.readFile() method is used to read files on your computer.

56) How To Read a HTML file using Node.js?
The fs.readFile() method is used to read files on your computer.

Note - If you don't specify an encoding for fs.readFile, you will retrieve the raw buffer instead of the expected file contents.

57) What Are the exit codes in Node.js?
Exit codes are specific codes that are used to end a process. 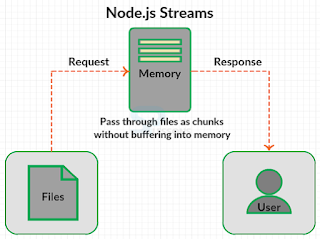 61) How to create log file in Node.js?
The Winston is a very-popular npm-module used for logging.

Install Winston in your project as:
> npm install winston --save

And then simply import wherever required as this:

You can see the logs success-logs and error-logs in a file under logs directory date.

62) How to call function from another file in Node.js?

See the example in below link,
https://evdokimovm.github.io/javascript/nodejs/2016/06/13/NodeJS-How-to-Use-Functions-from-Another-File-using-module-exports.html

63) Why Node.js is more popular than Ruby on Rails and other alternatives?
Node.js has ability to handle the thousands of concurrent connections with single process and minimum overhead using the JavaScript developed the server applications and networking applications.


64) What Is EventEmitter in Node.js?


In Node.js, EventEmitter is use to “emit” an errors and also when your object emits lots of types of events.

//This method is called, when an "error" event is emitted!
event.on("error", function(error) {
console.error(error);
//console.trace(error);
});