Microsoft Azure is an open-source for client SDKs, cloud computing service for building, testing, deploying, and managing applications and services through a global network of Microsoft-managed data centers.

Microsoft Azure is created and developed by Microsoft Corporation and the Initial release was 1 February 2010. 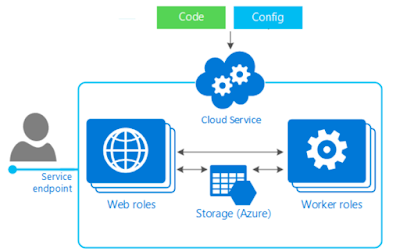 Windows Azure was originally code named “Red Dog” and was initially called “Windows Cloud” when it first launched in October 2008.

Is Azure a SaaS?
Azure Web Sites and O365 serve as a SaaS offering.

Why do People use Azure?
Microsoft Azure has leveraged and it’s constantly expanding worldwide network of data centers to create Azure, a cloud platform for building, deploying, and managing services and applications, anywhere worldwide.

What do you mean by Roles in Azure?
Roles in cloud management are often termed to be nothing servers that are linked to managing and balancing the platform as service machine that collaborate works to attain the goal.

Web Role:
Web Role is a Cloud Service role in Azure that is configured and customized to run web applications developed on programming languages/technologies that are supported by Internet Information Services (IIS), such as ASP.NET, PHP, Windows Communication Foundation and Fast CGI.

Web Role automatically deploys and hosts your app through IIS.

Worker Role is any role in Azure that runs applications and services level tasks, which generally do not require IIS. In Worker Roles, IIS is not installed by default.

Worker Roles are best suited for hosting backend processing and a wide variety of web services. A Worker role once started keeps running all the time just as a Windows Service. To keep it running, the worker role uses a simple while (true) loop.

VM Role:
VM Role is a kind of role in the Azure platform which helps to maintain service packs, patches, updates and applications already installed, to Windows Azure automatically.

The VM role is the newbie, and it uses a virtual hard disk (VHD) image of a Windows 2008 R2 server. The image is created internally on your network using Hyper-V technology and then uploaded to Windows Azure. This image can be customized and configured to run whatever software you would like to run in the cloud.

VM Role in the cloud doesn’t seem like the best option for the long-term.

They are provisioned in a similar way to Web Role and Worker Role. Whenever you specify you need a new instance of any of these roles, the “original” image is used. If you make modifications to the file system of one of these roles and then shut it down, those changes are not saved.

Be aware that it is the VM Role instance type in Cloud Services that is being retired on May 31st 2013, not Windows Azure Virtual Machines.

Summary:
1.      Web roles are web applications hosted in IIS.
2.      Worker roles are processes that can do some work (i.e. automatically compress uploaded images, do stuff whenever something changes in your database, get new messages from queue and process, you name it)
3.      VM roles host VMs
4.      Actually, Web Roles and Worker Roles are VMs.

Which Services Are Used to Manage the Resources in Azure?
Azure resource manager is the infrastructure that is involved in to manage deploys or deleting all the resources.

State the Purpose of the Cloud Configuration File?
There is a primary “.csfg” file available with each and every cloud service.

The main purpose of this file is -
1.      They hold the main copy of certificates.
2.      They have the storage of user-defined settings.
3.      There are a number of instances in any service project.

What Is Cloud Computing?
Cloud computing is the use of computing resources (hardware and software) that are delivered as a service over a network (typically the Internet).

What Are the Difference between Private Cloud and Public cloud?

Public Cloud:
1.      It is built for many organizations
2.      Publically shared virtual resources
3.      It is suited for less confidential information
4.      It may be accessible by other as well
5.      In a public cloud, scalability can be done easily

What Is Blob?
BLOB stands for “Binary Large Object”. Blob is file of any type and size.
The Azure Blob Storage offers two types of blobs –
1.      Block Blob
2.      Page Blob

What Is SQL Azure Database?
SQL Azure database helps in connecting to the cloud services where the database is stored for the organization on the cloud. It is also referred to as Microsoft SQL data services.

What Is Cspack?
Cspack is a command line tool which used to generate a service package file (.cspkg).

What Is Csrun?
Csrun is a command line tool which used to deploy a packaged application to the Windows Azure compute emulator and manages the running service.