The .NET Core is an open-source, cross-platform that runs on Windows, macOS and Linux developed by Microsoft. It also supports almost all things that .NET supported.

What Is ASP.NET Core?
ASP.NET Core is a cross-platform, high-performance, open-source framework for building modern, cloud-based, Internet-connected applications and developed by Microsoft.

ASP.NET Core is a Cloud ready environment, light-weight, modular framework that runs on both the full .NET Framework, on Windows, and the cross-platform .NET Core.

What's new in .NET Core 3.0?
This article describes what is new in .NET Core 3.0.
1.      .NET Core 3.0 adds support for C# 8.0
2.      .NET Core will now build executables by default. This is new for applications that use a globally installed version of .NET Core.
3.      Side-by-side versions of .NET that support WinForms and WPF – This one is the biggest enhancements to support Windows desktop applications.
4.      .NET build now copies NuGet dependencies for your application from the NuGet cache to the build output folder. Previously, dependencies were only copied as part of dotnet publish.
5.      Embed .NET directly into an application
6.      Take advantage of .NET Core features
7.      Fast built-in JSON support
8.      Modern browser and modern media controls
9.      Access to touch and UWP Controls
10. High DPI improvements
11. Async streams
12. Cryptography support has been added for AES-GCM and AES-CCM ciphers, implemented via System.Security.Cryptography.AesGcm and System.Security.Cryptography.AesCcm. 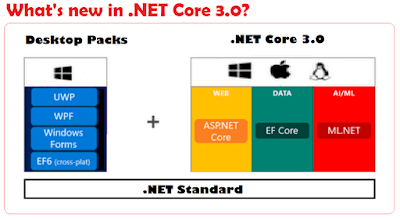 What We can Do with ASP.NET Core?
1.      We can build web apps and services, IoT apps, and mobile backends using our favorite development tools like Windows, macOS, and Linux.
2.      We can deploy this app on cloud or on-premises.
3.      These apps can run on both .NET Core or .NET Framework.

What Are the benefits of ASP.NET Core?
Why Use ASP.NET Core?
1.      It Is open-source
2.      A cloud-ready, lightweight, high-performance
3.      Integration of modern, client-side frameworks and development workflows
4.      Ability to host on IIS, Nginx, Apache, Docker, or self-host in your own process
5.      Architected for testability
6.      It can handle many requests

What Are the Main Characteristics of ASP.NET Core?
Cross-platform and super fast
Dependency Injection (DI) Container which is quite simple and built-in
There is no web.config - now using appsettings.json file
There is no Global.asax - Now using Startup.cs
Kestrel - Kestrel is a cross-platform web server built for ASP.NET Core based on libuv – a cross-platform asynchronous I/O library
Fully Async Pipeline
Extensible strongly typed configuration, which can also be used to reload at run-time.