What Is Artificial Intelligence (AI)?

In the above Artificial Intelligence (AI) diagram, you can see, AI is the branch of computer science and two way AI works –
1.      Symbolic
2.      Database –It is also called machine learning (MI).

To Create Expert Systems – The systems which exhibit intelligent behavior, learn, demonstrate, explain, and advice its users.
To Implement Human Intelligence in Machines − Creating systems that understand, think, learn, and behave like humans.

Where Artificial Intelligence (AI) can be used?
Currently, the Artificial Intelligence has been use in various fields such as –
1.      Gaming
2.      Speech Recognition
3.      Intelligent Robots
4.      Handwriting Recognition
5.      Natural Language Processing - Google Now feature, speech recognition, Automatic voice output.
6.      Expert Systems - Flight-tracking systems, Clinical systems and so on.
7.      Vision Systems
8.      Neural Networks –It is the face recognition, character recognition
9.      Fuzzy Logic Systems - Consumer electronics, automobiles, and so on.
10.  And much more

Does AI aim to put the human mind into the computer?
Some researchers say they have that objective, but maybe they are using the phrase metaphorically.

What Is Intelligence?
According to Professor John McCarthy –“Intelligence is the computational part of the ability to achieve goals in the world. Varying kinds and degrees of intelligence occur in people, many animals and some machines.”
OR
The ability of a system to understand, think, learn, self-awareness, reasoning, and creativity, problem solving and adapt new situations.

What Are the Advantages of Artificial Intelligence (AI)?
The Advantages of AI -
1.      Reduction of errors - AI helps us in reducing the errors rate compared to humans, if coded properly and increase the accuracy.
2.      Faster information processing and decision-making
3.      Increased personalization of the information received
4.      No Breaks - Machines are pre-programmed for long hours and can constantly perform their works.
5.      Repetitive Jobs - Repetitive jobs which are monotonous in nature can be carried out with the help of machine intelligence.
6.      Difficult Exploration - Artificial intelligence and the science of robotics can be put to use in mining and other fuel exploration processes.
7.      Digital Assistants
8.      Medical Applications - Doctors assess the patients and their health risks with the help of artificial machines.

What Are the Disadvantages of Artificial Intelligence (AI)?
The Disadvantages of AI -
1.      High Cost - Creation of AI requires much more money as they are very complex machines.
2.      Risks - Risks related to system hacking
3.      Robots as effective tools for killing
4.      Lack of control over decisions taken by the robots
5.      No Replicating Humans
6.      No Original Creativity
7.      No Improvement with Experience
8.      Unemployment - Replacement of humans with machines can increase unemployment.

What Is Robots?
Robots are the artificial agents acting in real world environment.

What Is Robotics?
Robotics is a branch of Artificial Intelligence (AI), which is composed of Electrical Engineering, Mechanical Engineering, and Computer Science for designing, construction, and application of robots.

What Is IQ? How much does it matter?
IQ stands for Intelligence Quotient.

Intelligence Quotient (IQ) is a measurement of your intelligence and is expressed in a number.

A person's IQ can be calculated by having the person take an intelligence test. The average IQ is 100. If you achieve a score higher than 100, you are smarter than the average person, and a lower score means you are less smart.

Every person can learn, no matter how intelligent. But some person struggle in office because of a weakness in one specific area of intelligence. These students often benefit from special training programs. There, they get extra help in the areas where they’re struggling. IQ tests can help instructor figure out which person would benefit from such extra help.

Also you know, 12-Year-Old Indian girl (Rajgauri Pawar) Living in England Has an IQ of 162 Which Is More Than from Stephen Hawking And Albert Einstein. 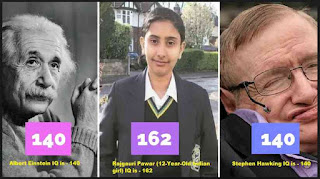