The Symbol in JavaScript is the new type of DataType. What they actually do?

List of Symbol Features:-
1.      The Symbol is used to create a unique identifier and every symbol value returned from Symbol() is unique.
2.      The symbol does not auto convert to strings.
3.      Symbols are great to be used as the key in objects.
4.      Two Symbols with the same description is never equal.
5.      The data type symbol is a primitive data type.
6.      While iterating over Objects, Symbol as the key won't be accessible. They become hidden properties. But, Object.assign({}) , Symbol will also get copied.

Syntax: - Symbol([description])
A description of the symbol which can be used for debugging but not to access the symbol itself

Do we really need symbols? 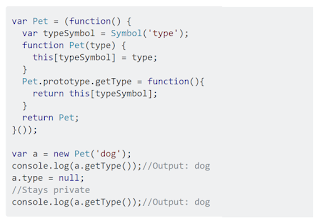 Buffer
Print
The Symbol in JavaScript is the new type of DataType. What they actually do?