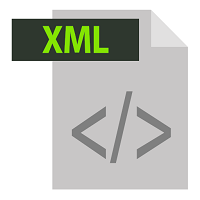 Extensible Markup Language (XML) is a technology which allows us to create our own markup language.

What Are the Benefits of XML?
The Benefits of using XML on the web -
1.      Simplicity - It is very easy to read and understand.
2.      Extensibility - There is no fixed set of tags and the tags can be created as per your needed.
3.      Openness - It is a W3C standard, endorsed by software industry market leaders.
4.      Self-description - XML documents can be stored without such definitions, because they contain Meta data in the form of tags and attributes.
5.      Contains machine-readable context information
6.      Separates content from presentation
7.      Supports multilingual documents and Unicode
8.      Facilitates the comparison and aggregation of data
9.      Can embed multiple data types
10.  Can embed existing data

What Is XML Schema?
XML Schema describes the structure of an XML instance document by defining what each element must or may contain.XML Schema is expressed in the form of a separate XML file.
Note –some XML data types are predefined and new ones can be created.

How does the XML structure is defined?
The Extensible Markup Language (XML) document will have a structure which has to be defined before we can create the documents and work with them. The structural rules can be defined using
many available technologies, but the following are popular way of doing so,
1) Document Type Definition (DTD)
2) Schema

What Is DTD?
The DTD stands for Document Type Definition and used to define the legal building blocks of an XML document.

What Is XML Schema Element?
The schema element defines the root element of a schema.

What Are differences between DTD and Schema?
The DTD follow SGML syntax but the Schema document is an XML document.

In DTD everything is treated as text where as the Schema supports variety of dataTypes similar to programming language.

In Schema, we can inherit, create relationship among elements but not possible in DTD.

What Is a Complex Element?
A complex element is an XML element that contains other elements & attributes as well.

What Is a Simple Element?
A simple element is an XML element that can contain only text.

What Are the ways to use XML namespaces?
There are two ways,
1.      Fist one, declare a default namespace
2.      Second one, associate a prefix with a namespace, then use the prefix in the XML to refer to the namespace.

What Is ElementFormDefault attribute?
An XML Schema can define whether its local elements must be qualified or unqualified in an XML document.  This is declared with the “elementFormDefault” attribute in the <schema> element.   The two possible values are appropriately named: qualified and unqualified.

What Is XmlReader class?
The XmlrReader class represents a reader that provides fast, noncached, forward-only access from XML data. We must need to import the Xml namespaces before using the XmlReader class in C#.NET - using System.Xml;

What Is an XML parser?
A XML parser is a program that "parses" XML and evaluates the XML code. Its use of XML parser is to read XML document by using library.

The XML parsers basically convert code into something that the hardware will recognize. The main objective of the parsers is to transform XML into a readable code.

The Features of XML parser are,
1.      Analyze the XML schema (XSD) or a significant XML sample
2.      Create an optimized relational target schema
3.      Automatically processes the XML files
4.      Can handle arbitrarily complex XML files and supports the whole XSD spec
5.      Provides data lineage in the form of a source to target map
6.      Scales for very large volumes

What Is DOM?
The DOM stands for Document Object Model.
DOM is a cross-platform and language-independent standard object model for representing XML and related formats.

DOM is a programming interface for HTML and XML documents.

What Is the difference between DOM and HTML?
DOM is an abstraction of a structured text. For web developers, this text is an HTML code, and the DOM is simply called HTML DOM. Elements of HTML become nodes in the DOM. So, while HTML is a text, the DOM is an in-memory representation of this text.

What Is SAX?
The SAX stands for Simple API for XML processing and the SAX provides a mechanism for reading data from an XML document.
SAX provides an event based processing approach unlike DOM which is tree based.

What Are the differences between DOM, SAX and StAX XML parsers?
DOM stands for Document Object Model while SAX stands for Simple API for XML parsing.
SAX provides an event based processing approach unlike DOM which is tree based.

DOM parser load full XML file in memory and creates a tree representation of XML document, while SAX is an event based XML parser and doesn't load whole XML document into memory.

StAX Much like SAX but instead of responding to events found in the stream you iterate through the xml.

The difference between SAX and StAX is that of push and pull. SAX Push Model and the StAX Pull Model.

StAX enables you to create bidirectional XML parsers that are fast. It proves a better alternative to other methods, such as DOM and SAX, both in terms of performance and usability.

What Is XSL in XML?
XSL stands for eXtensible Stylesheet Language.
XSL is used for displaying the contents of XML documents.

What Is XSL-FO?
XSL-FO is a markup language and used to generate PDF, DOC files.
XSL-FO is part of XSL.

What Is CDATA in XML?
What does <![CDATA[]]> node in a XML document?
CDATA stands for Character Data.

A CDATA section starts with "<![CDATA[" and ends with "]]>": CDATA sections cannot be nested.
A CDATA section contains text that will NOT be parsed by a parser. Tags inside a CDATA section will NOT be treated as markup and entities will not be expanded. The primary purpose is for including material such as XML fragments, without needing to escape all the delimiters.

From Wikipedia:
[In] an XML document or external parsed entity, a CDATA section is a section of element content that is marked for the parser to interpret as only character data, not markup.

In the example above, everything inside the CDATA section is ignored by the parser.

Notes - The "]]>" that marks the end of the CDATA section cannot contain spaces or line breaks. Nested CDATA sections are not allowed.

Is it possible to use graphics in XML?
Yes, you can do using XLink and XPointer.