When module X in an application needs module Y to run, then module Y is a dependency of module X. 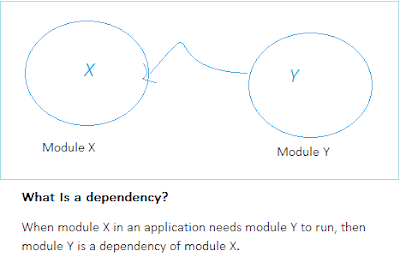 What Is Dependency Injection (DI)?

Dependency Injection is a powerful pattern for managing code dependencies. DI is a way to create objects that depend upon other objects.

Angular has its own DI framework pattern, and you really can't build an Angular application without Dependency injection (DI).

So to complete the CAR, we need those eight and so many things.

Let’s see what happen, without Dependency Injection (DI) –
To complete the CAR class, we need to import all eight classes here and make one fully functional CAR.

Now, here we have created eight classes instance in the constructor of CAR class.

Note that, the CAR class is totally dependent on these eight classes. Otherwise, it will not complete the CAR.

We are creating the instances in the CAR constructor. So Wheel, Headlight, Outer door, Inner door, Glass, Window, and Fuel are not decoupled from the CAR class.

//AppModule class with @NgModule decorator.
@NgModule({
//Static, This is the compiler configuration
//declarations is used for configure the selectors.
declarations: [
AppComponent,
],

In providers array, we need to provide all eight dependencies.

When CAR instance is created at that time, also all the other instances of other classes are also created.

What Is Dependency Injection pattern?
DI is an application design pattern and you really cannot build an Angular application without dependency injection (DI).

For more detail, refer the above questions.

What Is Injectors?
A service is just a class in Angular until you register with an Angular dependency injector.

The injector is responsible for creating angular service instances and injecting them into classes.

You rarely create an injector yourself and Angular creates automatically during the bootstrap process.

Explore in detail by using above questions, What Is an entryComponents?

What Are @Injectable providers?
The @Injectable decorator identifies services and other classes that are intended to be injected. It can also be used to configure a provider for those services.

To inject the service into a component, Angular provides an Injector decorator: @Injectable().
A provider defines the set of injectable objects that are available in the injector of this module.

The @Injectable decorator marks a class as available to an injector for instantiation. An injector reports an error when trying to instantiate a class that is not marked as @Injectable.

Injectors are also responsible for instantiating components. At the run-time the injectors can read class metadata in the JavaScript code and use the constructor parameter type information to determine what things to inject.

To inject the service into a component, Angular provides an Injector decorator: @Injectable().
Here we configure a provider for CustomerService using the @Injectable decorator on the class.

In the above example, providedIn tells Angular that the root injector is responsible for creating an instance of the CustomerService.

The Angular CLI sets up provider automatically when you generating a new service.

Why @Inject()?
The @Inject is a special technique for letting Angular knows that a parameter must be injected.

constructor(@Inject(HttpClient) private http) {
// use this.http which is the Http provider.
}

At this point, @Inject is a manual way of specifying this lookup token, followed by the lowercase http argument to tell Angular what to assign it against.

What Is Injector tree?
In the Dependency Injection guide, you learned how to configure a dependency injector and how to retrieve dependencies where you need them.