The Cocoa Touch helps us to create rich user experiences by allowing for the smooth movement of visual elements and iOS, watchOS, and tvOS technologies can be seen as a set of layers, with Cocoa Touch at the highest level and the Core OS/kernel at the bottom.

The Cocoa Touch also provides an abstraction layer of iOS. 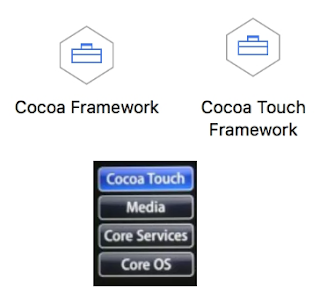 The Cocoa is a object oriented software libraries, application environment and a runtime system that helps us to develop OSX and iOS apps using Swift language and Objective C.

What are the differences between cocoa touch and cocoa?
Cocoas touch is an application framework for Apple products like iPad, iPhone and iPod Touch.

Cocoa is an application framework that helps in the development of applications in MAC OS X environment.

Both Cocoa and Cocoa Touch sit on top of other collections of frameworks to create the API stacks.

For MVC patterns -
1.      Cocoa - Cocoa has multiple alternative design patterns – in addition to MVC
2.      Cocoa Touch - The iPhone SDK has a reinforced MVC system, which performs better than the default MVC in Cocoa

What does cocoa touch offers?

Cocoa has a user interface objects like windows, buttons, tables, etc. These features can drag and dropped from interface builder and its code created automatically.

What is the meaning of core data?
Core data is a framework that helps to managing graphs and persistent storage.

What Is Xcode?
XCode is the engine that powers Apple’s IDE (integrated development environment) for OSX and iOS.

What are the differences between alloc and new?
The alloc creates a new memory location but doesn’t initialize it as compared to new.

Which one is thread-safe-atomic or non-atomic?
Immutable objects are generally thread-safe for example, NSString

What are the differences between release and pool drain?
The release frees a memory. The drain releases the NSAutoreleasePool itself.

What are the differences between @property and @synthesize?
The @property - declares a property.
The @synthesize - creates getter and setter methods for a property

What are the Relation between iVar and @property?
The iVar are just instance variables. It can't be accessed unless we create assessors, which are generated by @property.

The iVar and its counterpart @property can be of different