What Is R Programming Language?

The R programming language is most commonly used for developing the statistical software and data analysis.

The R programming was created by Robert Gentleman and Ross Ihaka at the University of Auckland, New Zealand in August 1993; 24 years Ago. 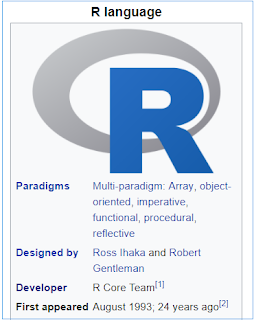 The currently managing and developing all the features and other related to R  - R Development Core Team and Its popularity is grown recent years.

What Are the Data Types in R?
The R programming language has a wide variety of data types including scalars, vectors (numerical, character, and logical), matrices, data frames and lists.

The simplest of these above objects is - Vector Object and there are six data types of these atomic vectors, also termed as six classes of vectors. The other R-Objects are built upon the atomic vectors.

What Are Use of with () and BY () functions in R?
The with () function is used to apply an expression for a given dataset and its looks like –

The by () function is used for applying a function each level of factors and its looks like –
#by(data,factorlist,function)

Why Use R for Statistical Computing and Graphics?
ü  R is open source programming and free!
ü  R runs on all platforms
ü  R is most popular and currently increasing its popularity

How R commands are written?
By using the “#” at the starting of the line of code and its looks like “#division” commands is written.

What Is the use of sample () and subset () functions in R?
The sample () function is used to generate a random sample of the size n from a dataset.